Connecting An Xbox 360 Slim Hard Drive To Your PC

Don’t put all your saves in one Eggs-box :(

My Xbox 360 slim started behaving strangely the other day. I’d just bought some new games and was going through the process of installing them to the HD. Half way through the install the Xbox crashed and I was back at the profile select screen.

I deleted the half installed game files and tried again. It still crashed and I was back at the profile select screen. This time selecting my profile would cause the Xbox to reset. I tried a different profile and it reset. Even accessing the system menus without selecting a profile would cause it to reset 🙁 As soon as there was HD access the Xbox would die.

My Xbox is an arcade (4GB) version that I later upgraded with the 250GB HD. My profile is located on the 4GB so I removed the HD to see if my profile would now work. It did! This narrowed my reset problem down to the HD. It was either a faulty HD or a possible filesystem problem.

Whatever the issue, I wanted to try to recover as much as I could from the drive and that meant plugging into my PC.

Some initial searching lead me to believe that the Xbox HD is locked so can’t be read in a PC. I saw some Youtube videos showing users booting their original Xbox with the HD attached to unlock it then moving the IDE cable over to their PC. I had the newer Xbox though… and it uses a SATA connection. Other videos showed people using a specific cable from the older Xbox HD caddy to connect their Xbox Slim SATA HD to the Xbox transfer cable. It quickly seemed like too much hassle and cost! So I thought I’d try a different approach B)

I had a cheap 2.5″ SATA HD Case sitting around, like the one pictured on the right, that I’d bought from eBay a while ago. 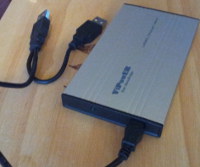 Opening the case reveals the end with the SATA connections.

I connected this directly to the Xbox SATA drive and plugged it into my laptop. The drive was recognised by the computer but wasn’t mountable as it uses a custom filesystem. 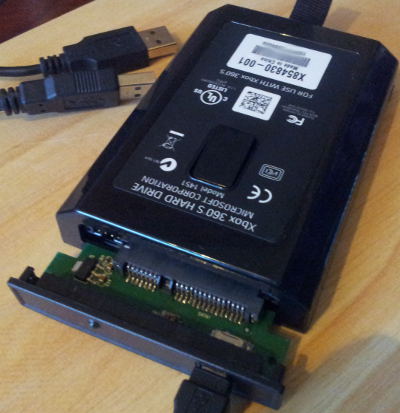 To recover the contents of the drive check out this post: Recovering Data from an Xbox Hard Drive